Johannesburg is a must-visit. Here’s why.

I wasn’t even supposed to go to South Africa’s Johannesburg, let alone fall in love with it. But 10 days in the city, in Gauteng, and other provinces proved to me that a place with not-the-best reputation and usually seen as just a stopover can be one of the most culturally dynamic and hospitable cities to visit. Check out my wheres, hows, whos, and what-to-dos.

If you’re a fan of the luxe life, you can choose properties in the northern suburbs of Johannesburg, such as Sandton, Rosebank and Melrose.

I love The Winston Hotel in Melrose-a five-star boutique hotel nestled in quiet and leafy surroundings. This tranquillity is mirrored in its classical architecture and the inner courtyard and pool, which make up the view from my balcony (lucky me!). It’s grand without being stuffy and has an intimate atmosphere thanks to its excellent staff and their personalised services (Timothy’s warm personality and magnificent cocktails are number one; second are the great lengths the staff will go to make sure you get around safely). All this while maintaining your privacy and your own space. And what a space! The generous rooms, with their striking combinations of colours and patterns, are a picture of modern African opulence. So stunning 😍. 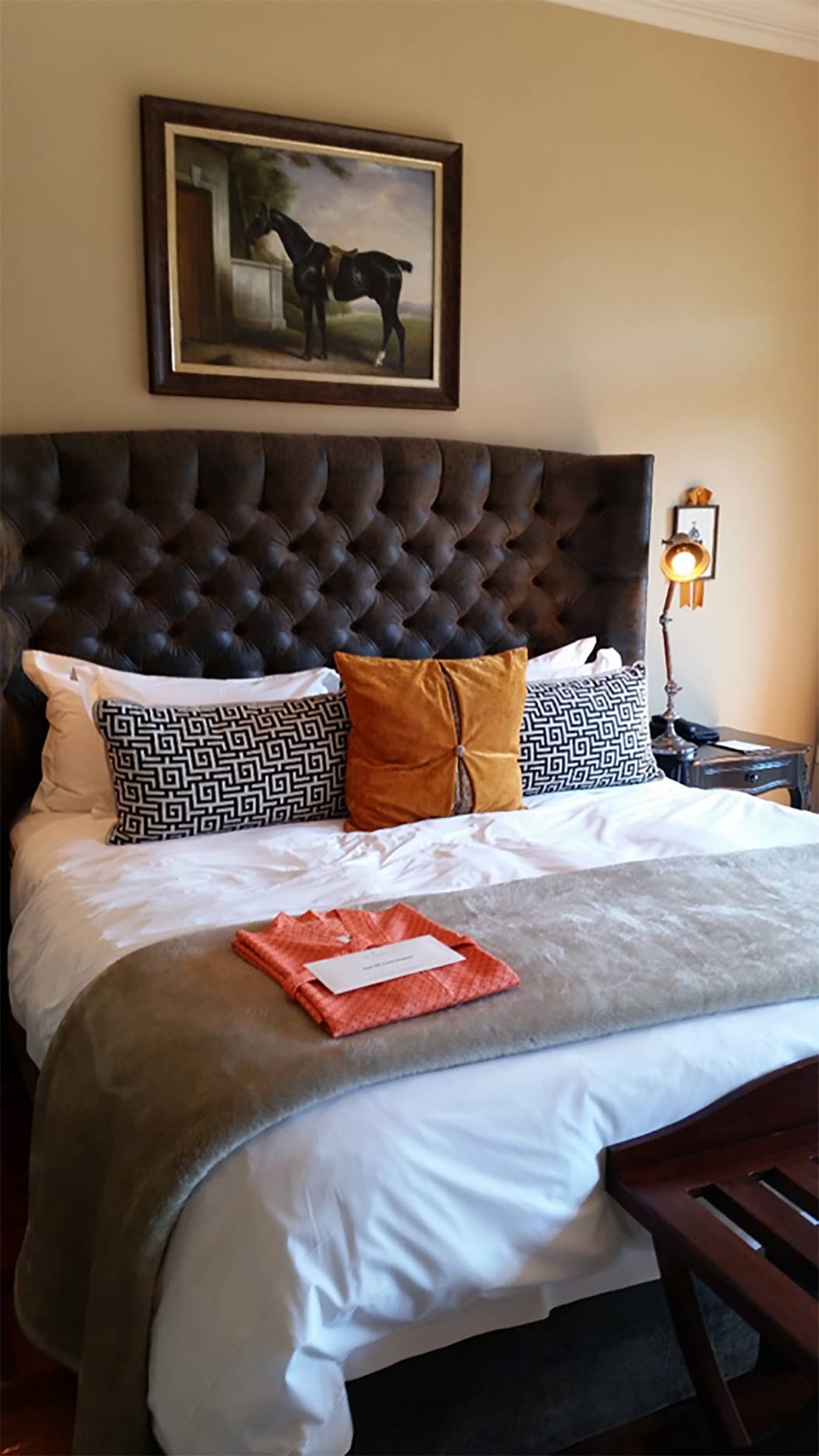 Courtyard View – The Winston Hotel – with a smidgen of pool.

I also recommend the City Lodge Hotel Newtown, which is just over two years young and in the middle of downtown. 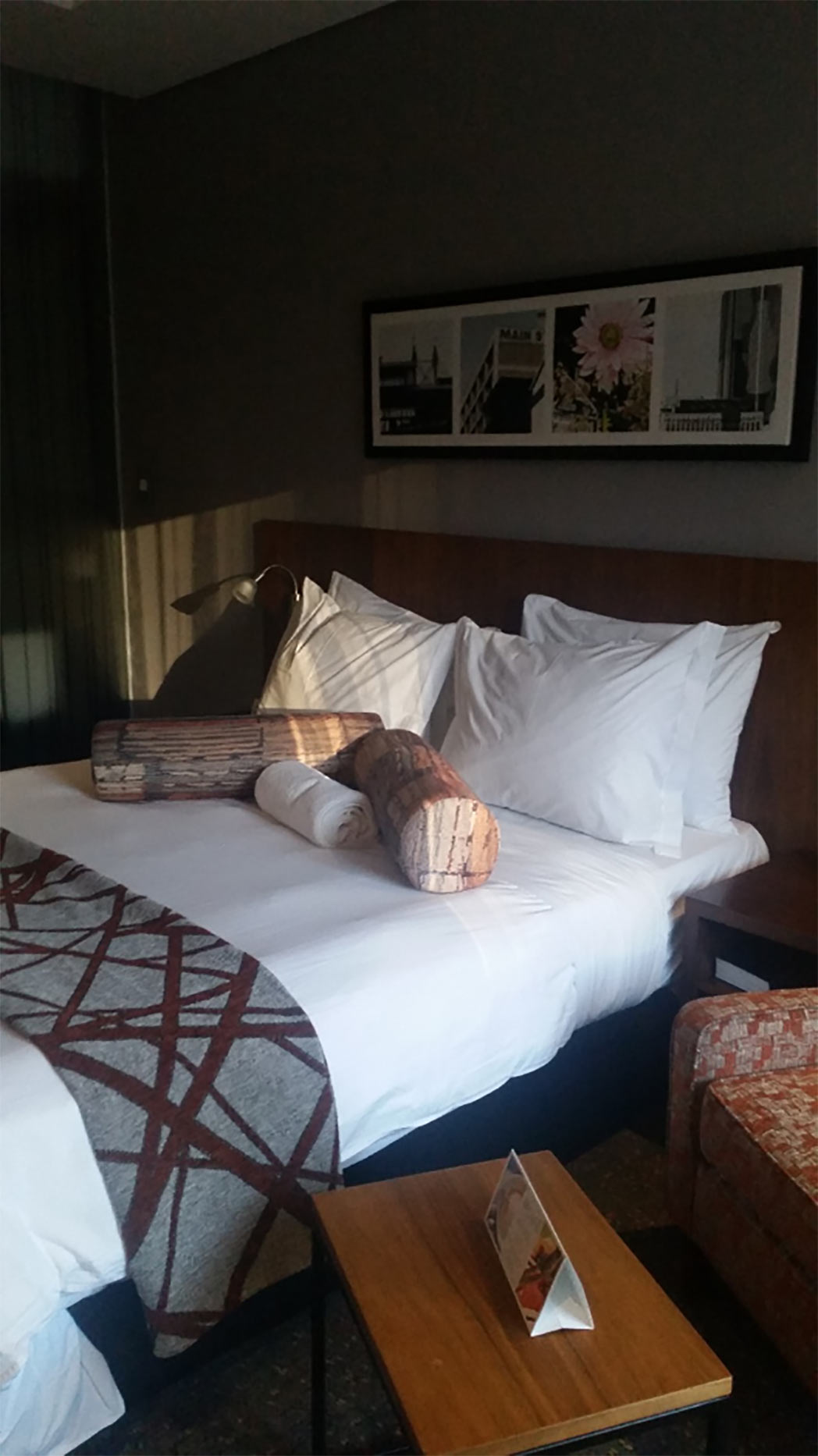 The City Lodge Hotel Newtown might not be as plush as a five-star hotel, but it still has everything you need. There’s buffet breakfast (which is so good you’ll need about six helpings to do your tummy justice), access to a primo tour guide from Vhupo Tours to take you to the Apartheid Museum and Soweto township, a well-equipped gym to use or slink by, the most incredible shower that cures back pain from long-haul flights and long days of walking, and the sweet sounds of the Zulu language.

The speedy Gautrain goes from the O.R. International Airport to the Rosebank and Sandton railway stations. At the airport, a taxi driver might approach you and respectfully call you “Mama” to offer you a ride to your hotel, or you can catch one of the official yellow taxis to the left of the exit. Uber or Taxify (with cash-trip options) are also available. You can also catch the much cheaper shared minibus taxi. Ask around for the right arm action to go uptown or downtown, as well as where the stops are.

For a more touristy option, or to see more of the city, the Hop-On Hop-Off tour bus is an open-top, double-decker with three different routes—around the city, the same city route with a drop-off at Soweto for township tours, and a suburban Joburg tour.

Newtown, Braamfontein and Maboneng and the famous Soweto are dotted with street art and installations, murals, design stalls and galleries. In Braamfontein, check out the Wits Arts Museum and the Stevenson Gallery, among others. Jan Smuts Avenue, which criss-crosses the suburbs of Rosebank and Parkwood, is also worth a look. It’s home to a variety of modern and contemporary art galleries that you can explore one after the other, in between cafe pit stops. Pro tip: Galleries in these areas stay open until 9pm on the first Thursday of every month, which is great if you need to squeeze your visit in between day tours. 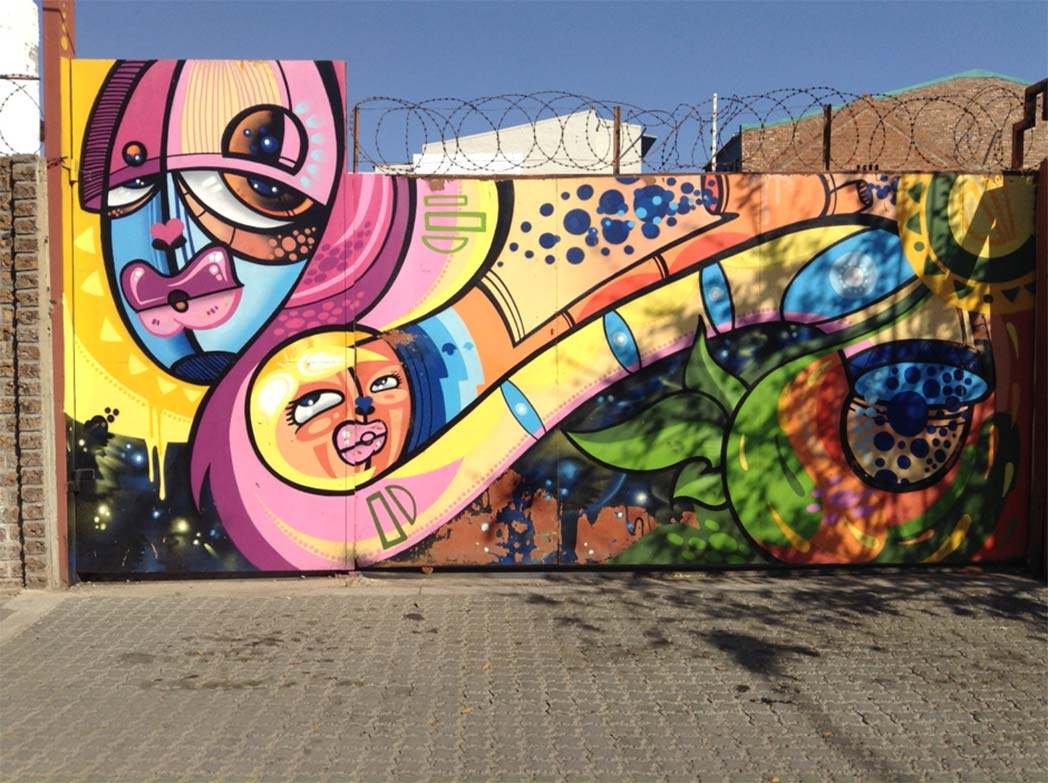 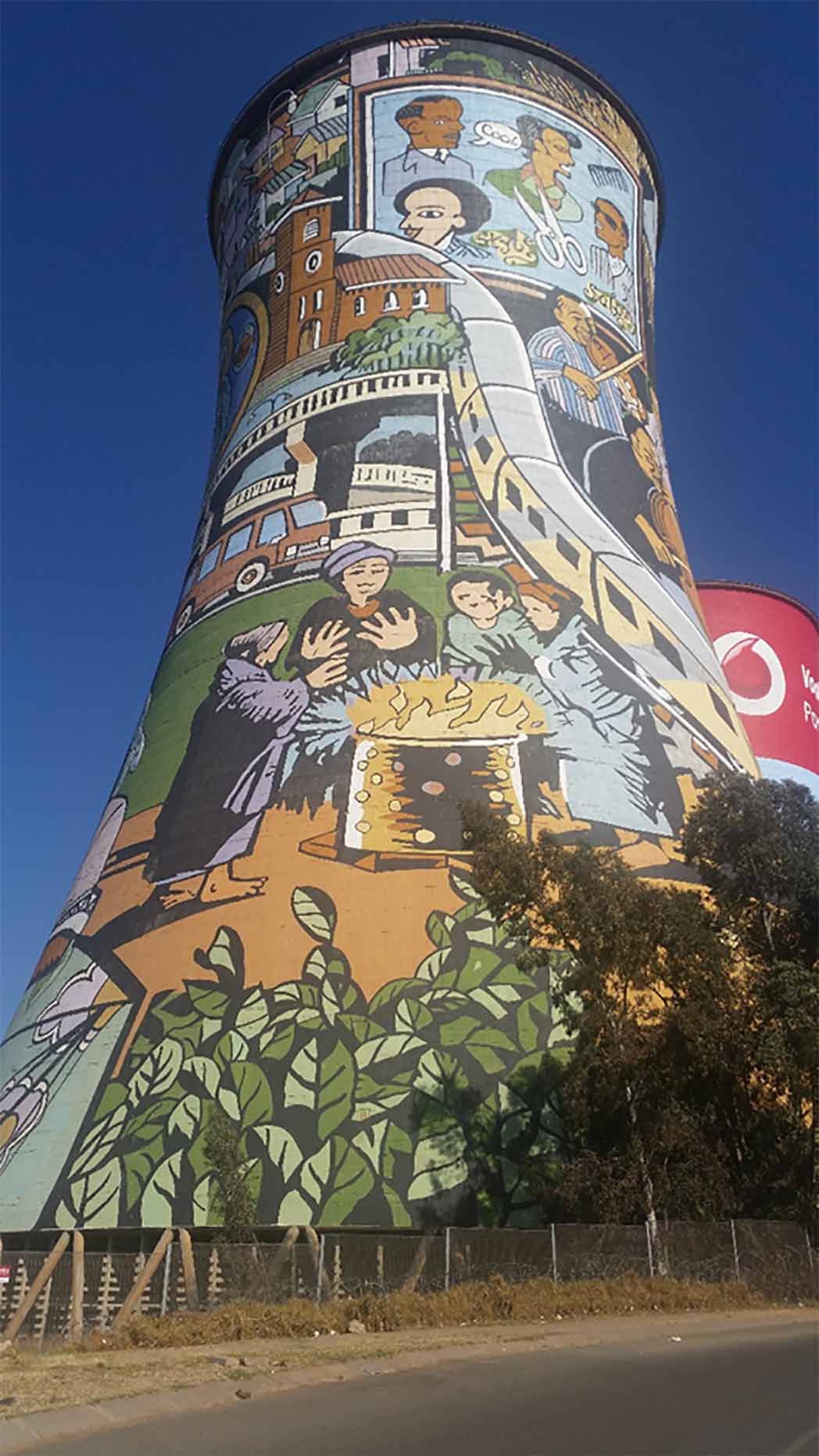 The Orlando Towers in Soweto with one of its murals.

If you want to take some art home, Arts On Main in Maboneng has a weekly Sunday market selling regional food and South African designs. Also check out Thabo Khumalo’s ToVch label for statement-making, elegant fashion design. His flagship store is at 278 Fox Street, Maboneng. 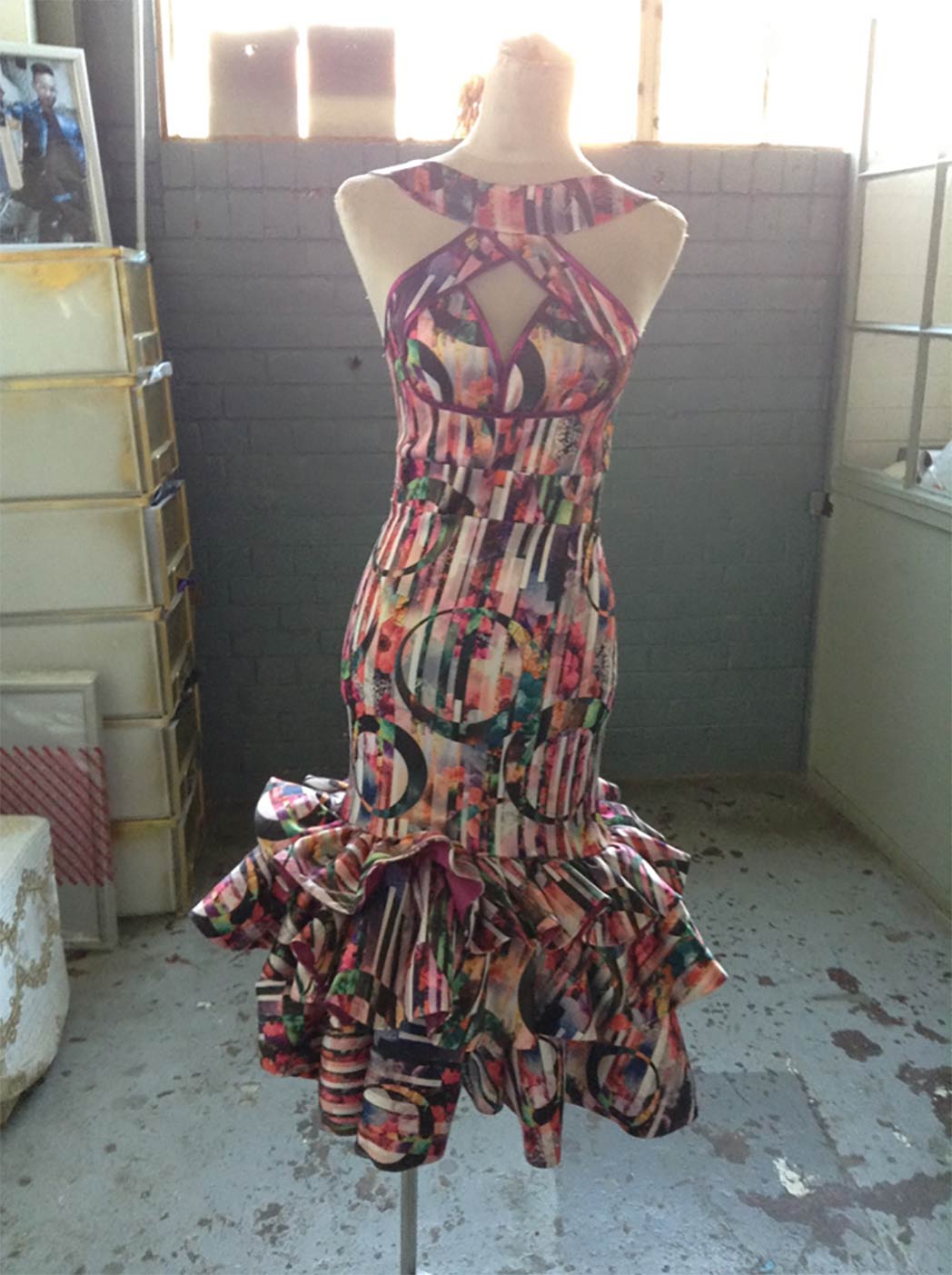 Johannesburg gave birth to the great Miriam Makeba and is now known for its innovative house music (deep house, Afro house, and Kwaito) and jazz. For strong house beats, check out Rosebank’s Capital Underground, while Friday and Saturday nights at Illovo’s Babylon The Bar is a must for LGBTIQ revellers.

Not up for dancing? Head to the News Café for delicious food, classic cocktails, and live music. Or check out The Orbit in Braamfontein – a jazz venue and restaurant with black walls, brilliant acoustics, and a relaxed yet cosmopolitan vibe. To hear music in its country of origin as part of an audience that knows (and loudly appreciates) it is just magic! 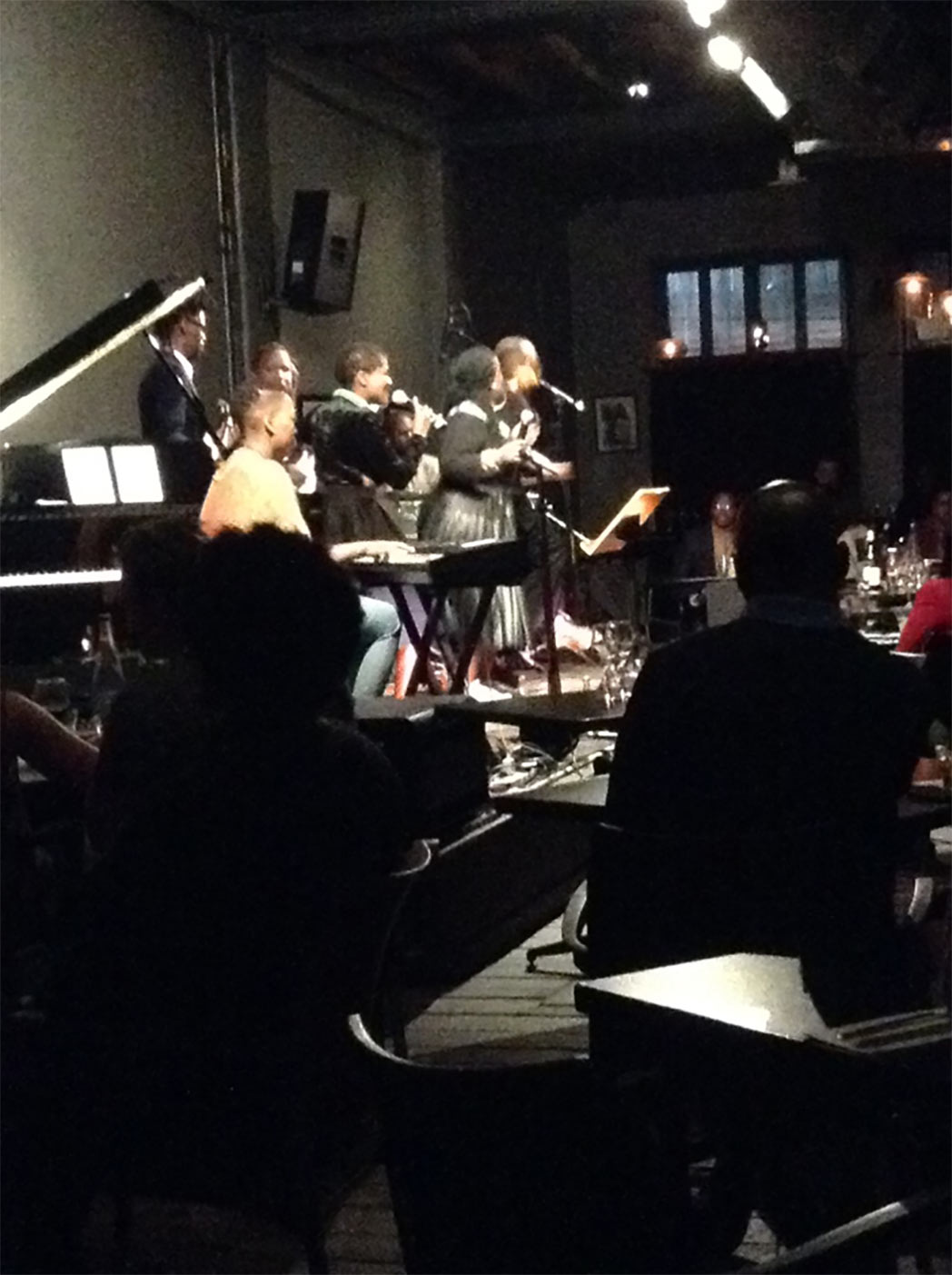 Safari and the great outdoors

Joburg also makes a great base for a safari. There are plenty of companies you can tour with, to either the private game reserves that make up the Greater Kruger Park or the less exclusive Kruger National Park. Seeing the animals in their natural habitat is the best thing ever! 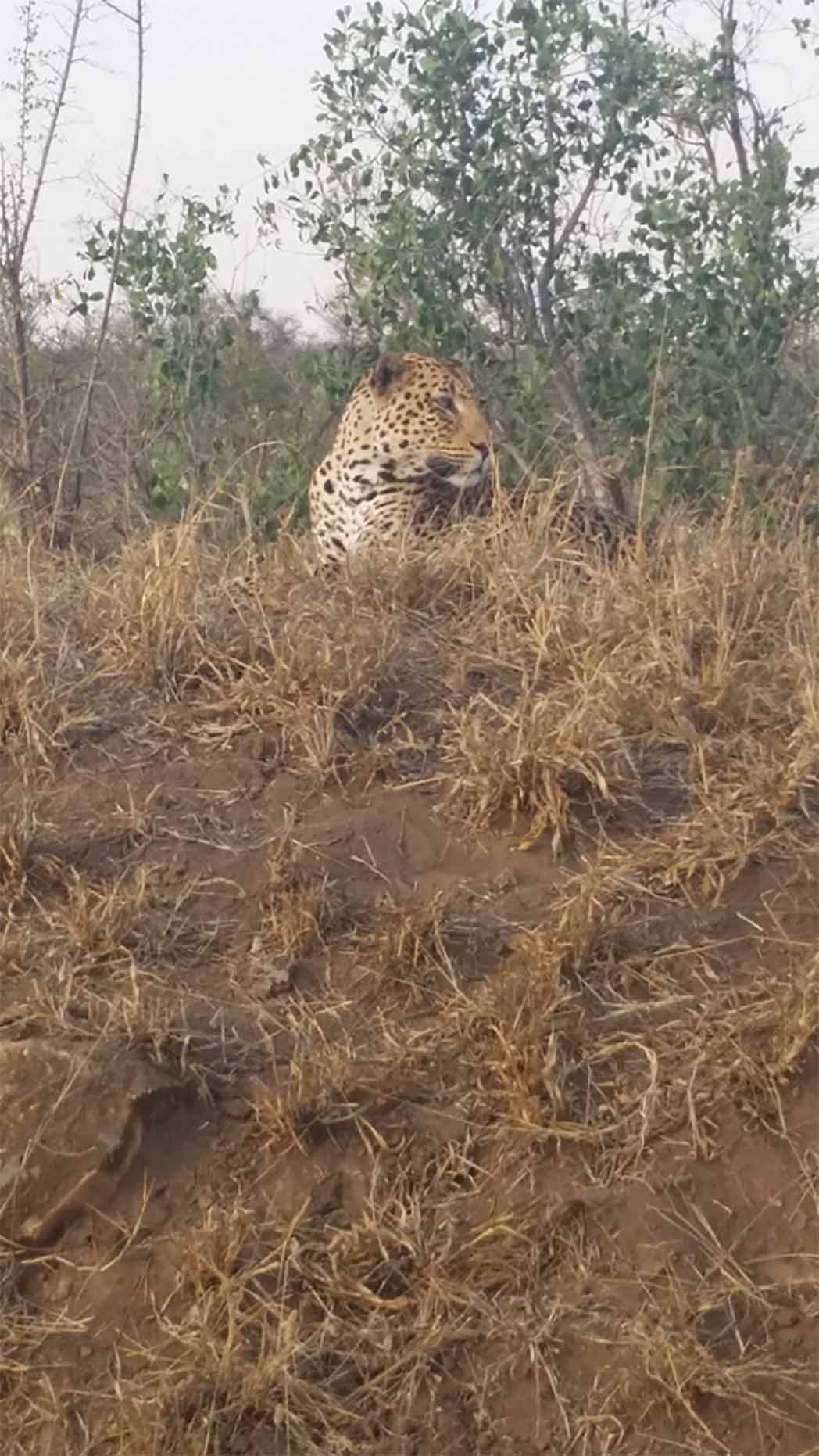 Leopard posing in the Kruger National Park on our first half-day safari tour! 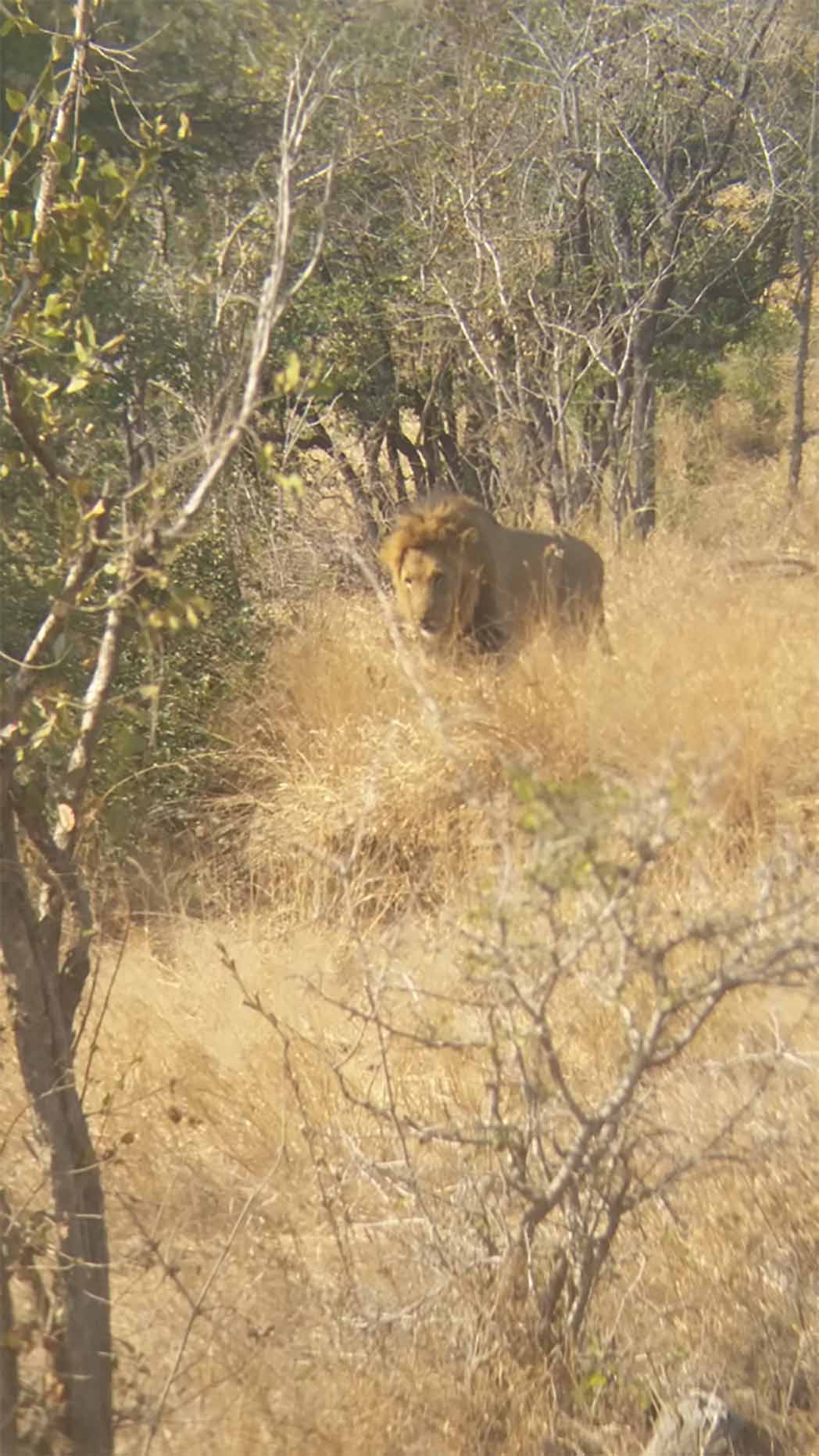 Tanya, our expert local safari guide, took this photo of a lion – the lioness and her pride are out of sight!

While everyone hopes to see the Big 5— a rhino, hippo, leopard, lion, and elephant—the best part of a safari is the anticipation and suspense. You never know which animal you’ll see or how many, if you’ll spot them again, if you’ll find a community of different types of animals all together, or even if you’ll see a hunt! 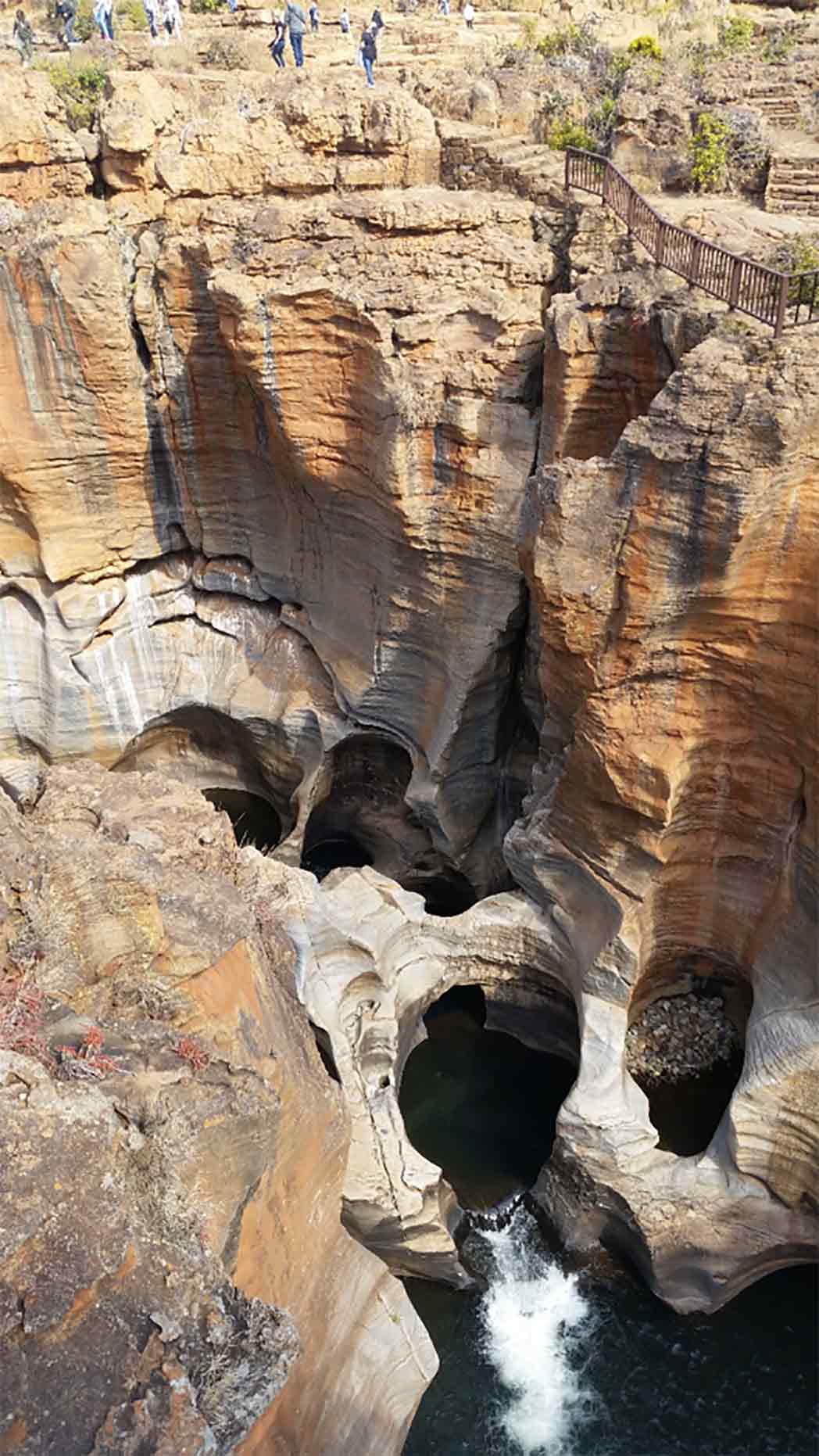 On returning to Johannesburg from your safari, make sure you check out the Blyde River Canyon! 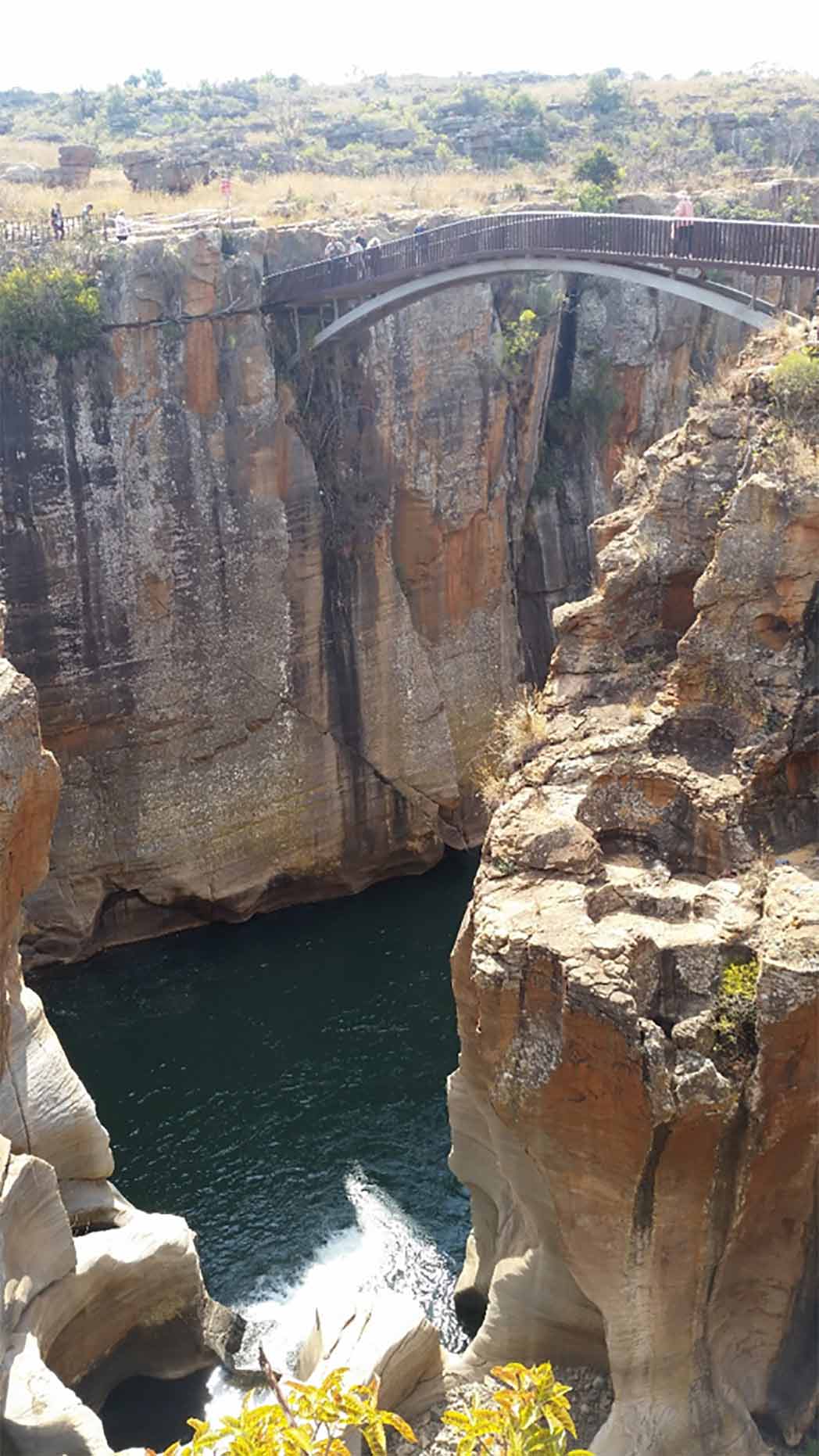 And here it is again – the Blyde River Canyon.

Almost as spectacular is the Cradle of Humankind. There, you’ll be guided down into Sterkfontein Caves, 60 metres underground (a trek that involves climbing down rocks and crawling through small, narrow spaces). As you make your way through the limestone caves, you’ll hear stories about palaeontologists and the fossils they discovered—Mrs Ples and Little Foot, members of extinct hominid species that could be our ancestors. 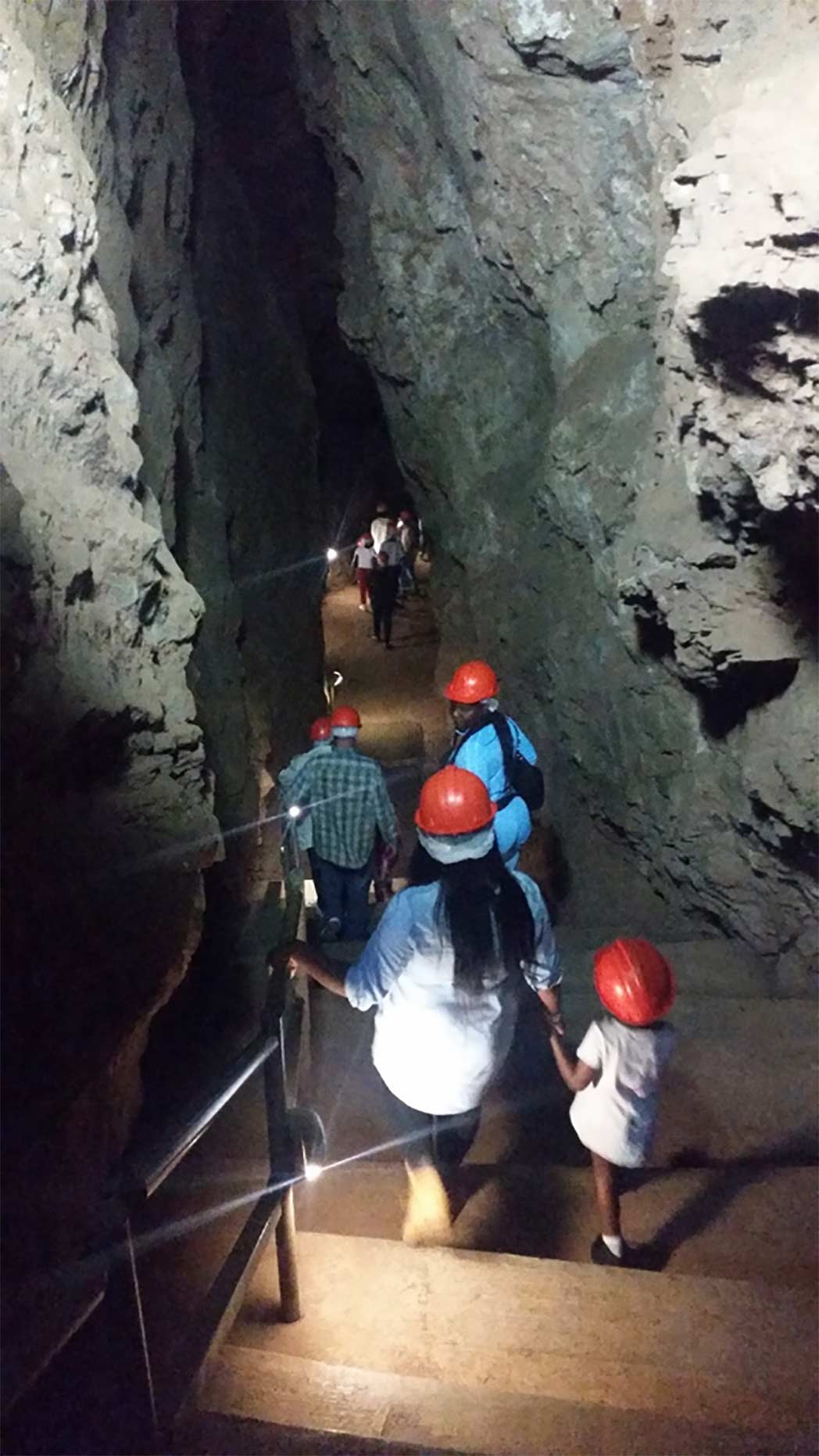 The second half of most tours is Maropeng, where you’ll see an almost-complete skeleton of another of our near-relations – Homo naledi, discovered in 2015. Millions of years of species have come before us—and to come face to face with a small part of the world’s prehistory is wondrous!

Johannesburg, its province of Gauteng, and the nearby provinces of Limpopo and Mpumalanga offer you a wealth of experiences, whether you’re travelling for fun, nature, culture, learning, science, history, or the arts. Like any city, Joburg has well-off areas that are perceived as safer, regeneration programs, and supposed no-go areas. But in reality, you can find beauty and wonder anywhere – whether on the streets, in the city’s design, the discoveries you make, or the people you meet.

Book your next trip to Johannesburg 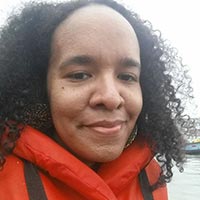