The lastminute lovelies in Melbourne

Sydney and Melbourne may be locked in an eternal battle for superiority, but for this lastminute lovely, the choice is clear.

Every time I visit Melbourne it gets harder and harder to say goodbye – goodbye to the cool bars, the cool lanes, the cool cafes, the cool people. Oh Melbourne, if you were any cooler, you’d be Fonzie.

This time around, I not only fall in love with Melbourne all over again, but also neighbouring Mornington Peninsula.

Picking up our hire car from Melbourne airport, we manage to sweet talk our way into an upgrade from a blokey V6 to a snazzy Astra convertible. Thelma and Louise eat your heart out! 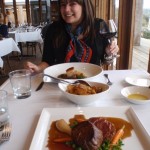 Windswept and smiling, we pull up at Montalto Vineyard and Olive Grove for lunch and are immediately struck by the view. Floor to ceiling windows showcase a breathtaking vista of vines, olive groves and sculpture. It’s just gorgeous – and then there’s the food and wine! Recipient of both a Chef’s Hat from the 2010 Age Good Food Guide and five red stars in the 2010 Halliday Australian Wine Companion, Montalto is THE place to eat in Mornington. Casually elegant, with delicious provincial food, incredibly friendly staff and some of the best pinot noir I’ve ever tasted, this is a meal we won’t soon forget. 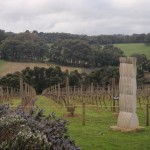 After stocking up on some of that delicious pinot, we head off to check out more of Mornington’s 170 wineries, 50 of which have cellar doors. From T’Gallant and Ten Minutes By Tractor to Port Phillip Estate, it’s easy to see (and taste!) why Mornington is one of Australia’s premier wine regions. Cheers!

Full, happy and with a boot full of wine, we continue onwards to Peninsula Hot Springs. A series of pools filled by natural thermal mineral waters that bubble up from deep underground, we feel as if we’re in the famous hot springs of Iceland or Japan. As if that wasn’t weird enough, we’re in bikinis in Victoria in July – but with the water hitting 50 degrees it’s impossible to be anything but warm. This is the ultimate setting for relaxation, indulgence and healing, and we leave feeling recharged and completely chilled out.

Minutes later we arrive at Peppers Moonah Links, our accommodation for the night. If ever you need an excuse to drag your better half to Mornington, this is it – not only does the resort have two 18 hole championship golf courses, but a brand new endota day spa. Everybody wins! Team this with 96 super stylish rooms and a great restaurant, and you’ve got the ideal base for exploring gorgeous Mornington. 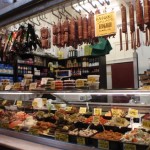 Next morning we’re up early to hit the road for Melbourne, and arrive at The Olsen Art Hotel just an hour and a half later. Set on the Chapel Street shopping mecca, The Olsen is one of Australia’s hippest hotels, and is peppered with the artwork of revered Aussie artist John Olsen. My room has fantastic views of the shoppers below, as does the swimming pool – it’s glass bottomed and overhangs Chapel Street! Super cool.

While we’d happily hang at The Olsen all day long, it’s time to head to Melbourne’s famous Queen Victoria Market for a Foodies Dream Tour. There’s only one thing that the lastminute lovelies love as much as travel, and that’s FOOD, so we’re super excited to meet our guide, Felicity. Two hours of foodie fun follows, from sampling incredible breads, olives and cheeses to ogling vegetables that we’ve never heard of, let alone seen. As Sydney-siders, it’s astounding to think that people get to do their groceries here each week – think David Jones Food Hall, without the pretention or the prices. Heaven.

Bidding farewell to Felicity, we hop on one of Melbourne’s iconic trams and make our way to ACMI for the Tim Burton exhibition. As a huge Burton fan I am in my absolute element, and soak in the displays of everything from sketches, storyboards and costumes to the Batmobile. The man is a bona fide creative genius, and it’s an honour to get a glimpse into his wild, often macabre inner workings.

It’s now time for some art of a different kind, and we head down the road to the National Gallery of Victoria for the European Master: Stadel Museum 19th-20th Century exhibition. With works by artists like Picasso, Monet and Renoir, it’s an astounding collection, and a real treat to see works like this in our own backyard. 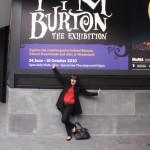 lastminute lovely Courtney outside the Tim Burton exhibition at ACMI

All this culture is making us hungry, so we hop on a tram, head back to South Yarra and jump out at Caffe e Cucina restaurant on Chapel Street. A Melbourne stalwart, this is the home of excellent, authentic Italian food, from deliciously crisp calamari and fusilli pasta with ragu to the best tiramisu I’ve ever had. The staff are great too, and I giggle when a cute waiter tells me I’m welcome with a wink and a “Prego, bella”. It’s the perfect end to a perfect meal, and we leave very full and very happy.

Making our way to the CBD, we head for Her Majesty’s Theatre and take our seats for the musical theatre sensation that is Mary Poppins. Brilliantly adapted from the books by Australia’s own P.L. Travers (who knew?) and the classic 1964 Disney film, this is hands down one of the best musicals I’ve ever seen – joyous, uplifting and with oodles of songs to sing along to. Starring Matt Lee, Marina Pryor and Julie Andrews lookalike Verity Hunt-Ballard, it’s an awesome cast and an awesome production. Practically perfect, in fact!

Next morning, we head back to the CBD bright and early, because Melbourne personality Fiona Sweetman is waiting to take us on one of her famous Hidden Secrets Arcades And Lanes tours. Fiona is friendly, fun and incredibly knowledgeable, and we spend the next few hours discovering a plethora of Melbourne’s hidden gems. It’s a fabulous tour care of a fabulous local, and we finish feeling as if we’ve seen more of Melbourne in a few hours than we have in a dozen previous trips.

Last stop – Melbourne Museum and the Titanic: Artefact Exhibition. Equal parts sad and fascinating, this incredible exhibition gives fantastic insight into the 1912 demise of the ship they said was ‘unsinkable’, with detailed reconstructions of the ship’s interior, artefacts salvaged from the wreck and poignant quotes from survivors and the lost alike. It’s as poignant as it is impressive, and we leave thinking of the 1,517 Titanic passengers who perished.

It’s been a fantastic, whirlwind weekend in Melbourne and Mornington Peninsula, and as we head for the airport we’re already making plans to return. There’s plenty to do in Melbourne at the best of times, but our weekend has proven that this winter, Melbourne is simply unmissable.