Take a step back into your childhood with NSW blogger Daniella as she experiences the hottest stage show in Sydney.

One of my proudest childhood achievements was my role as a tap-dancing penguin in our school’s year three production of Mary Poppins. As one of many kids who grew up presenting impromptu concerts to amused grandparents about supernatural nannies and charming chimney sweeps, I was intrigued as to how Poppins’ famously impossible feats would be achieved on stage.

The Disney and Cameron Mackintosh production of Mary Poppins at Sydney’s Capitol Theatre is a visual and aural spectacular that will have audiences of all ages convinced of the power of magic. Superb backdrops change within a blink of an eye, a talented cast doesn’t cease to impress, and the special effects are first class. Combined, they present a seamless and enchanting tale of the mysterious nanny who transforms the dull lives of the Banks family. 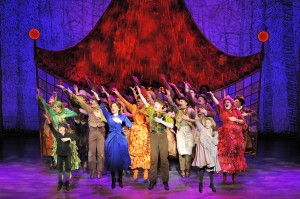 The vibrant, dazzling and charismatic performance is a ‘practically perfect’ mix of Australian author P.L Travers’ original book with the much loved 1964 film, combining original Sherman Brothers numbers with new songs by George Stiles and Anthony Drewe. Verity Hunt-Ballard channels Julie Andrews so effectively that it seems as though she has flown onto the stage – umbrella in hand – directly off the screen.

Her poise, charm and unflappable mannerisms are complemented by Matt Lee as the lovable Bert, who brings an infectious exuberance to Cherry Tree Lane. Lee’s tap-dancing performance while upside down on the roof is eye-popping, one of many gravity defying effects that astonishes the audience.

The much loved ‘It’s a jolly holiday’ is a joy to watch, seizing the imagination of the audience as the set magically and instantly transforms from stale, grey London to a technicolour fantasy world full of movement, energy and dance. The magnificent watercolour sets change so seamlessly that one forgets it is happening before our very eyes. Another highlight is ‘A Spoonful of Sugar’, a comical scene that has been moved from the bedroom to the kitchen. Adults and children alike will be amazed by the magical reassembling of a destroyed kitchen – broken crockery mending itself, cutlery flying into place, and cakes popping out of the oven. 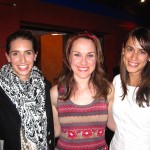 We meet Mary Poppins herself! (middle)

Marina Prior and Philip Quast command the stage as the troubled Mrs and Mr Banks. The story is as much about teaching these stiff characters to embrace their inner child, as it is about a nanny using unorthodox methods to improve the behaviour of naughty children.

With spectacular choreography, a magnificent 16 piece orchestra and a brilliant cast, Mary Poppins is an absolute delight. The joyful abandon of a four year-old girl dancing furiously on her chair during the last number reflected the mood of the audience after three hours of pure, whole hearted entertainment. This show is an opportunity to immerse yourself in an imaginary world full of happiness, enchantment and magic – no matter how old you are.

Keen to experience Mary Poppins for yourself? We’re currently offering a package including Saturday night accommodation at a participating Sydney CBD hotel and an “A” Reserve ticket to the show from $219 per person.
Click here for details.

What movie would you most like to see hit the stage?