Bonjour, hi! And come with me to Montreal for a few minutes.We’re going to escape the Big Apple for a moment, (more on that to come later 😉 ) and fly to Montreal in a tiny Delta Airlines plane out of JFK. You’ll have to bend your head to board and do an awkward shuffle down the aisle. You’ll clench your eyes shut during take off. Feel every updraft, every down gust. The alternative is catching the train for 12 hours, so trust me it’s worth putting up with the turbulence and tummy flips. 😉 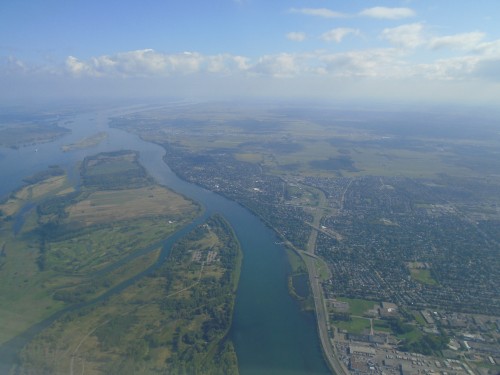 45 minutes later, you’ll see green out the window. You’ll notice the hills, the winding rivers, mountains in the back. This is Montreal – French Canada. So start practicing your “merci”s and “parlez-vous”s, zis is going to be le awesome!

Here are six things you MUST DO while you’re here

“As soon as I get to Montreal, I’m walking straight off the plane and buying some poutine,” says Mr LML.
The poutine dream is, apart from being a heart attack in a bowl, probably the best drunk food ever. It’s a plate of hot chips and cheese curd covered in gravy, and best eaten on a starving stomach. 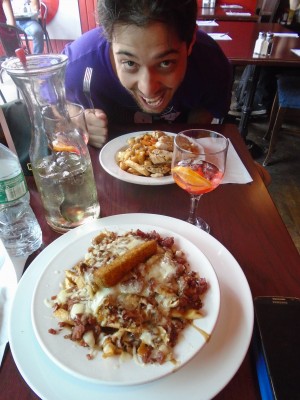 Montreal is famous for smoked meat and big pickles. And Schwartz’s Deli is the place to go to get all up in that. Not one for vegetarians, you’ll walk up to this place via a pile of carcasses smoking in the window. 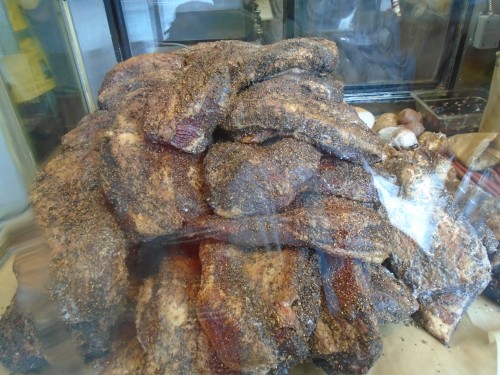 The dish everyone’s here for is the famous smoked meat sandwich with fries on the side. And look, no-one needs that much meat in a sandwich, but hey, it’s damn delicious. 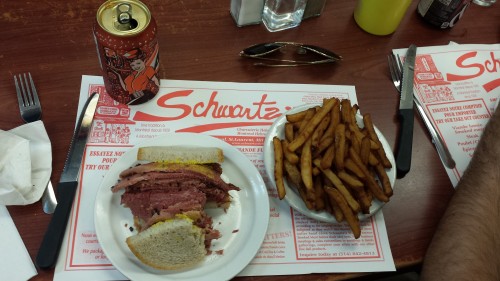 Hot tip: be prepared to wait in line to get a seat, this place is hella popular. But they smash through the people, so you won’t wait long.

3. Have a Mt Royal picnic with une baguette!

All this French talk means you’ll have to arrange a wine and cheese picnic at some stage – it’s the French thing. Slap in the middle of downtown Montreal is Mt Royal, a Twilight-esque (yes, the movie) fairy garden complete with pesky squirrels and gorgeous old trees. 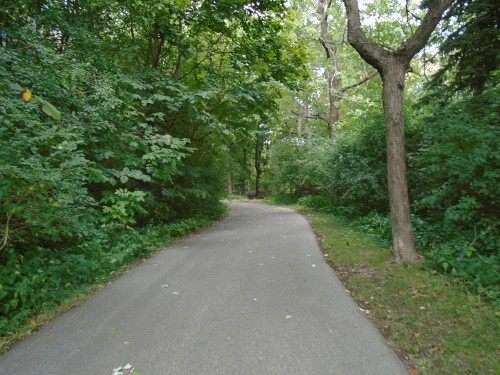 I know Edward and Bella are around here somewhere

We pick up an assortment of picnic goods including berries, pâté and cheese from a IGA and sloth around here for the afternoon. 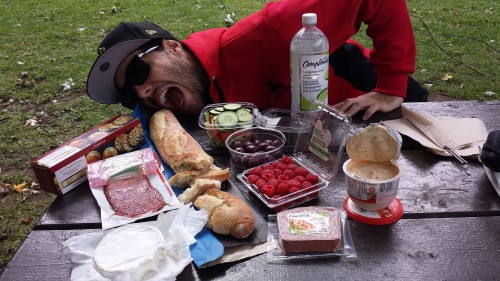 And when you’ve stuffed yourself beyond belief, siesta on the grass while squirrels ambush your food as you start to nod off. 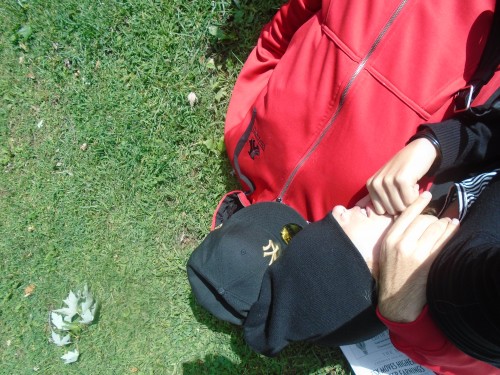 Once you’ve recovered, check out the view of the city from the top of Mt Royal. It’s free – FREE. You don’t get that much 😉 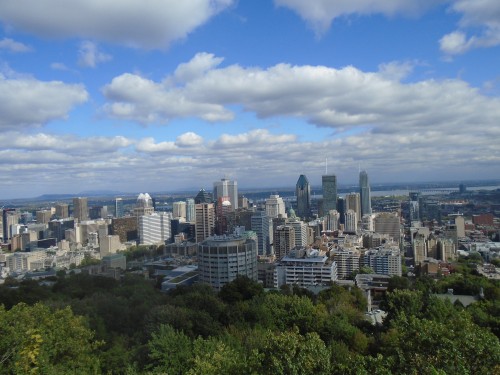 Crescent Street is the Cavil Ave of Montreal. So which bar to choose? We head to Thursday’s Bar, a stylish, electronic-music-pumping cocktail bar. If it’s a giant cocktail you want, then get yourself here. This thing is literally as big as my head. 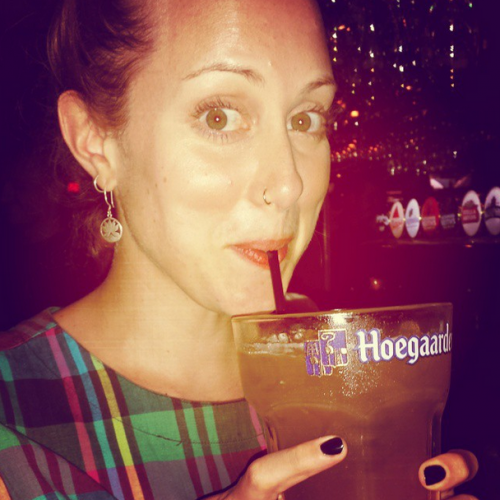 If you like gin, order the Bombay Jakarta. Complete with pepper and a cucumber stirrer, it’s like an entree and drink in one. Salut!

Montreal, thankfully, has a way less scary traffic situation than New York. Riding bikes here is en vogue and similarly to NYC, you can rent bikes from stations in 30-minute rental windows. Just swipe your cc and you’ll pay around CAD$14 dollars per 24 hours and have 30 minutes to get from one station to another. If you don’t return your bike within 30 minutes, there’s a small charge. 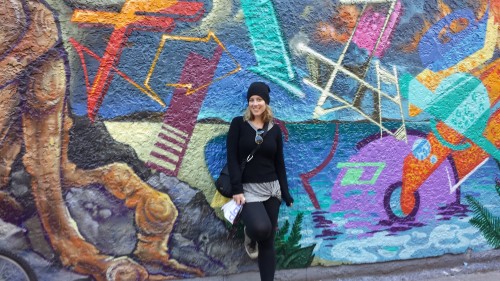 Plus you’ll work off all the poutine and see some rad street art. If that’s not winning, then I don’t know what is. 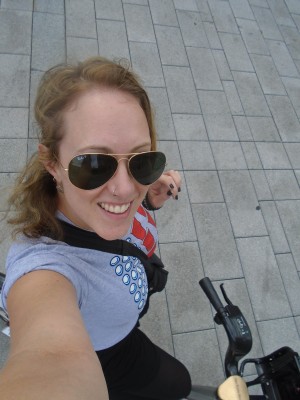 6. See the sloth at the Biodome

Here’s a hot tip: when in Montreal, don’t underestimate the power of an Australian accent to confuse taxi drivers. Pronounce this as “Bee-o-dome” instead of “Bye-o-dome” and you’ll be sweet. 😉 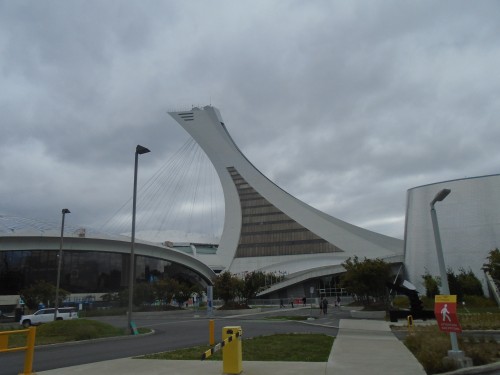 The Biodome is about a CAD$27 taxi ride from downtown, and it’ll cost you CAD$18 for a day pass. It’s a super-modern, giant climate simulator, with four different habitats inside. There’s a tropical and North-American forest, an Arctic and an estuary, all imitating North-American eco-systems.
But, by far the best thing is the two sloths. Real life sloths- OMG!

A sloth! An actual moving beautiful sloth. I died.

So there you have it. Do you have any Montreal must-dos to add? Share them with us in the comments.