Let’s face it, we’ve all been die-hard obsessed with something or someone, from the guys and gals of 90210 to the lead singer of to your local sports team. But how far would you be willing to go to meet someone from that show/band/team?

We interviewed one Brisbane-based fanatic, Jess Ma, who shelled out some big bucks and travelled halfway around the world for a little show called The Big Bang Theory. 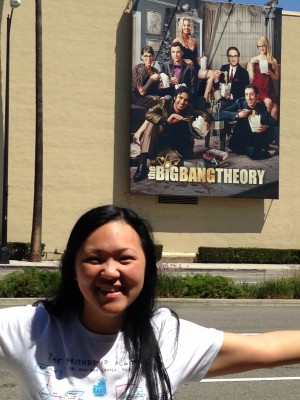 Q: Ok Jess, let’s get straight to it: how much did you pay for your Big Bang Theory experience?

Well, I went halvsies with another BBT fan and all I’ll say is that it was more than a couple of grand each… but totally worth it!

Q: Sounds like a decent chunk of moula. Some people might call you crazy. How do you rate yourself on the BBT fan scale?

I think I’m pretty hard core but there are people out there who are like SERIOUS hard core fans. I will, however, admit I’m a pretty SERIOUS Shamy (Sheldon and Amy) fan, hence the birthday cake for my 30th. 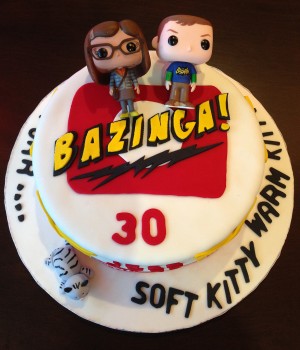 Is this not the best cake ever?

Q: How did you find out about the auction?

A friend I met on Fan Forum (The Big Bang Theory thread) told me Mayim Bialik (Amy) was holding a charity auction. We emailed each other about it and decided to go for it since we were planning on meeting up in LA anyway.

Q: OK, so the bids were ticking up, you still had to pay to get to LA, book some accommodation… did you get cold feet at any time?

There was no way I was going to pull out of the auction – seriously, this was a shot at a dream coming true for me – but it was a pretty intense couple of weeks. I couldn’t believe it when we won. I literally broke down crying and shaking; apparently I looked like a teenager who had just won tickets to see 1D!

Q: Can you give us a rundown of what happened on the day?

We arrived at Warner Bros. Studios around 4.45pm. We had the best seats EVER (seat 2 and 3 from the middle in the front row), right next to the MC/crowd warmer. He gives everyone the ground rules for recording, keeps the crowd entertained between takes and asks us to practice our ‘natural laugh’. We were literally only five metres from the actual sets and we could see the entire production team and cast members right below us. It was so weird seeing the whole gang there just metres from us.

It’s really interesting to see how the show’s made. It’s all one continuous set from Penny’s apartment (4B) to the guys’ apartment (4A) with the elevator in between. Our taping went for around 3½ hours which is pretty standard; apparently they can go for up to 5! They’ll re-take a scene if there’s something they’re not happy with or change lines on the spot if the audience doesn’t really respond to the jokes (and yes this actually happened a couple of times during the night). The MC encourages the audience to continue laughing, even at the fifth take, as the laughs you hear on the show aren’t fake, they’re actual recordings of the live audience.

At the end of the show I got to shake Kaley Cuoco-Sweeting’s (Penny) hand as she was thanking all the fans and she signed my program on her way out. All the VIPs headed down to the set and I ran into Kunal Nayyar (Raj) who signed a picture for me. Then I turned around and there was Mayim with her hand out introducing herself to me. I was SOOOO nervous I was shaking and pretty much speechless but managed to introduce myself. Mayim got us into a photo and was more than happy to sign the Big Bang stuff I brought with me. She was just so lovely and SUPER nice!

A dream come true, Jess gets her photo taken with Mayim

After we took some photos with her she showed us around the sets. We got to see Howardette’s (Howard and Bernadette) apartment and the prop room which was filled with action figures and stuff that’s used to decorate the apartments and Stuart’s Comic Book Store. All the figurines were so cool. 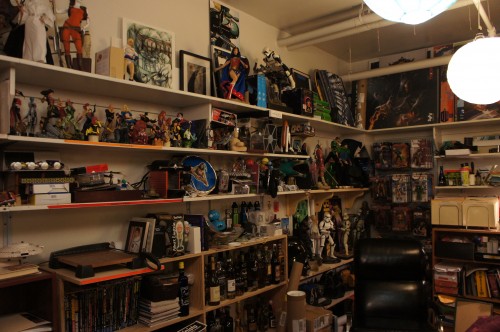 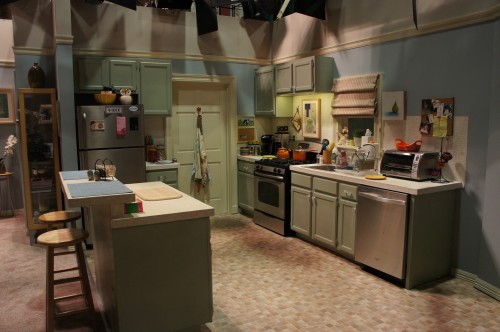 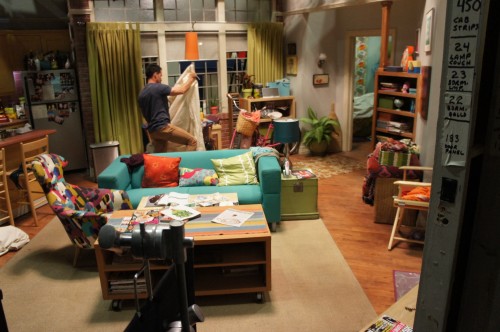 It was an AMAZING night. I’m still on cloud nine two months later! 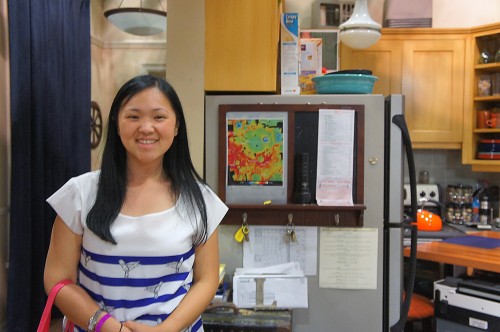 In Sheldon and Leonard’s kitchen

Q: Did you get to meet any other cast members?

Oh yeah! Aside from Kunal and Kaley, I also met Simon Helberg who plays Howard; Mark Cendrowski, the director; and Steve Molaro who’s a writer and executive producer on the show. Everyone was super friendly and were happy to shake hands, get photos taken and sign stuff for us. I was in BBT heaven. 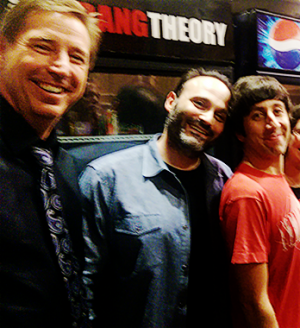 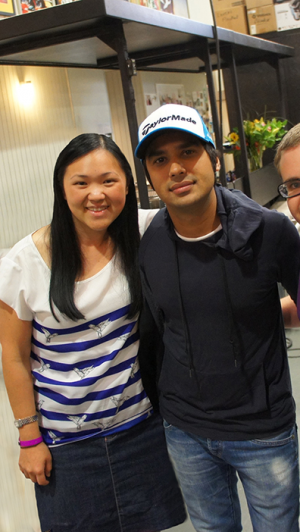 Q: So you decided to make a holiday of it. What other places did you decide to tack on to your trip? 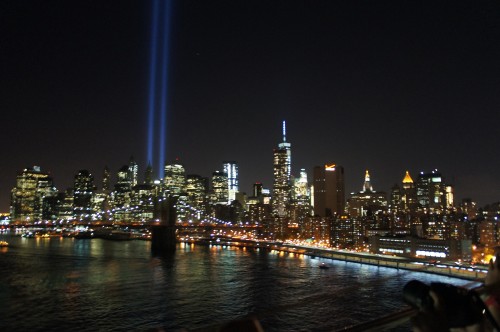 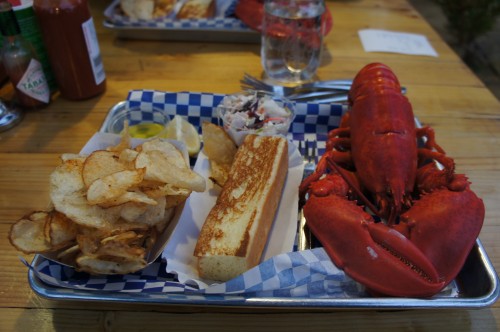 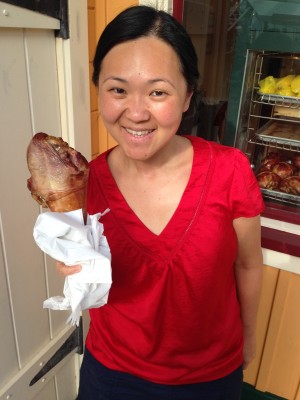 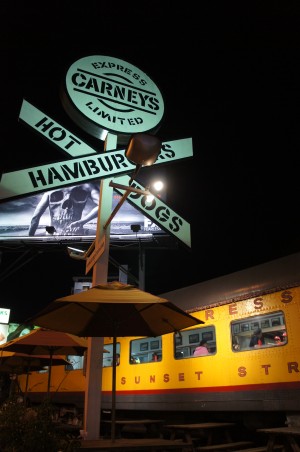 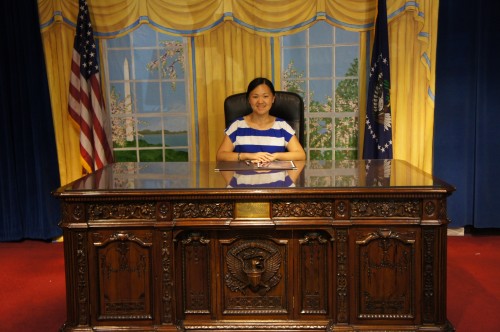 Playing President at White House Gifts (located across the street from the White House), Washington D.C. 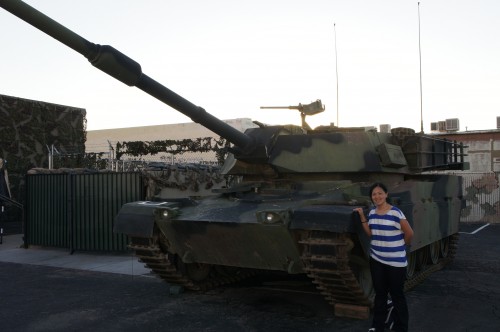 Q: Where was your fave destination?

LA. I’ve always dreamed of going to New York but in the end I had the best time in LA… and it wasn’t just because of BBT. Universal Studios, Disneyland, California Adventure Park, massive Walmarts and being able to cruise around in a Camaro really did it for me. 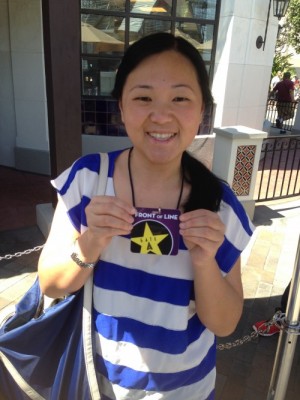 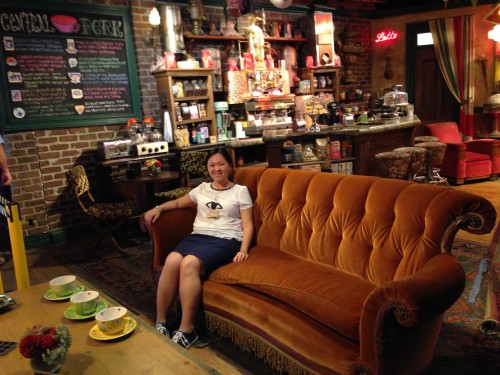 Having a coffee at “Central Perk” from Friends – Warner Bros. Studios

I’m kind of obsessed with LA right now. If I could just pack up and go, I’d be there in a heartbeat.
Hot tip: Getting a Front of Line Pass for Universal Studios is worth every penny. You’ll have priority access to the rides as well as the shows so you can spend less time queuing and more time on the fun stuff. Book online before you go – the passes sell fast.

What TV shows are you obsessed with? Tell us in the comments.