Mick road tests the latest cookbook from celebrity chef Bill Granger with a little help from his team of taste-testers.

Bill Granger is a self-taught cook. As I flicked through his latest cookbook, Bill’s Everyday Asian, I noticed the easy to read and relatively simple recipes that reflect this fact. 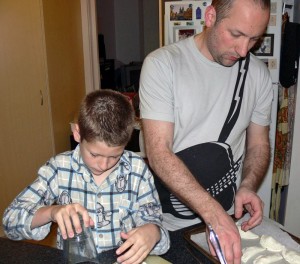 I am not a ‘Masterchef’ by any stretch, but I like to think that I am pretty adept at reading and following recipes. This cookbook has a great range of starters, soups, mains and desserts with easy to follow recipes and bright colourful photos.

My children were interested in choosing what I was to cook, so with their help we ended up deciding on some curry puffs for starters which appeared to be quite a simple way to start the meal.

I pulled my puff pastry out of the freezer (which I just so happened to have!) and busied myself with the preparation for the filling. The difference in this dish compared to other curry puffs I have tried was the inclusion of boiled potatoes mixed in with chicken and curry powder. I couldn’t help but nibble on the stuffing as I rolled them up with the puff pastry.

With the help of my son, we rolled up the half-moon shaped puffs and popped them into the oven. 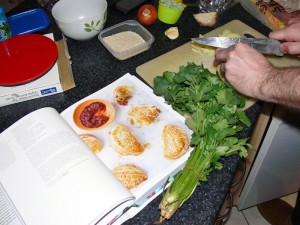 My ‘customers’ eagerly awaited the result and as the curry smell wafted from the oven, they couldn’t keep their hungry mitts off! The proof, as they say, was in the pudding as the two trays of puffs were polished off by my family in record time!

With the addition of some chilli sauce they were a perfect starter for the evening.

For the main course we chose something a little different. Pork larb with toasted rice was something that none of us had tried before, so I was excited to give it a go. 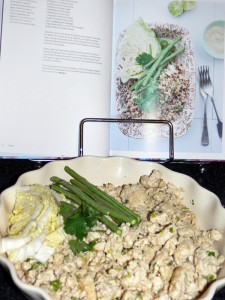 The preparation went relatively smoothly with the toasting of the rice and pounding of the garlic and chilli. The aromas coming from the mortar and pestle were amazing as I continued with the cooking of the pork in the wok.

I believe the smells from Asian cooking are so important and the spicy rich aromas coming from the wok had us all salivating. It was great to learn a new tasty combination of herbs from this recipe plus the use of kaffir lime leafs and snake beans were ingredients I had never used before.

I served up the meal with a sprig of coriander and delivered to the hungry hoard. The lime flavours and crunchy textures of the toasted rice were definitely a highlight of this unique dish. With fresh snake beans and cabbage on the side, this dish was an all-round winner.

The verdict from the family was in, and they approved! From just these two recipes I could tell that Bill Granger has delivered a fresh, simple and unique Asian cookbook that I will definitely be keeping handy for the future. Maybe I’ll even let the kids make dinner for me next time!