You might think a trip to Canberra for a birthday present wouldn’t win ‘girlfriend of the year’ award, but it’s got hills (great for mountain biking), vineyards (good for rehydration) and with the opening of a new design hotel, Canberra Hotel Hotel I am convinced that the ooh factor will at least get me a nomination.

The arrival
Despite its name (repeated to ensure people know it’s a hotel if we didn’t hear them the first time?) we swoosh through the electric doors to enter something very different to any hotel we’ve stayed in before.If this hotel was a love child it would be Alice in Wonderland crossed with Moley’s home from Wind in the Willows kissed by Swiss Alpine Lodge swagger. Now I know that’s a hell of a threesome given that Hotel Hotel does things in doubles, but just roll with it. Most receptions are vacant of any personality but this is like arriving at a friend’s party with a ticket straight to where all the cool people hang out! We are seduced within moments, this is pretty damn cool and we haven’t even seen our room. 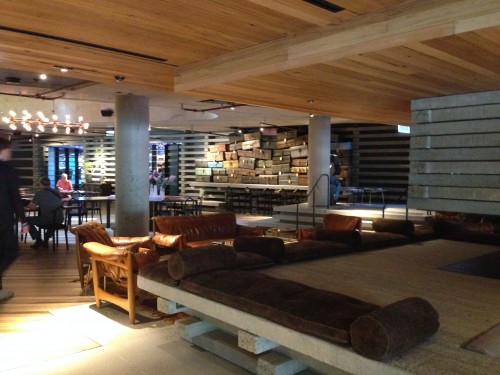 Knowing room types range from ‘Original’, to ‘Creative’ to ‘Meandering’, we book the top option. It’s Mr LML’s 32nd after all! We twist up the stairs leaving the party below onto the first floor. This is where things get a bit trippy. Our meandering room is internal. Opening the door, we notice no natural light except from one window which we only see once we have walked down a corridor and into an open room.

It’s moody, sexy and fantastical but in an organic way, with carpeted floors, walls made from concrete, recycled timber, bamboo wallpaper, recycled glass coloured pendants and eucalyptus chip board cupboards. A white fluffy chair tucked under a timber table snaking along the room leaves me wondering whether to hug it or feed it a bag of oats!
The vroom factor of any room is the bathroom and it doesn’t disappoint.

Full-size Aesop bottles are snuggly attached to the wall. Word of advice on running the bath; go out for the day, maybe have dinner, watch a movie perhaps and then it will be full. Or, do what I do and reach around the stone partition and grab one of the double shower heads as a nifty second power flow. Be warned; this thing has more force than a Jedi knight. I manage to wrestle it under control but only after soaking every surface! Dry fluffy towels are highly overrated right?

As the Hotel Hotel restaurant isn’t yet complete (due April 2014) we head to one of the best dude-food spots in the city. “Reservation for Karen?” Sean Doyle replies “OK, cool as…” The service is punctuated with personality rather than restraint but oh man, the food is seriously good, (I mean Federal Court serious).

After sitting up at the bar sipping on a sprightly Per La Ge Prosecco, we’re instant friends with Josh, one of the head chefs leading a crack team of cooks. Everything surprises and delights. Steak tartare has a nam jim dressing, tomatoes sing with Burmese spices, nuts, chilies, coriander and garlic. If you love chicken (chicken haters you’ll be converted) it’s THE dish. Mr Kernal would be jealous of these kewpie mayo finger lickin’ babies served with a bottle of hot sauce. 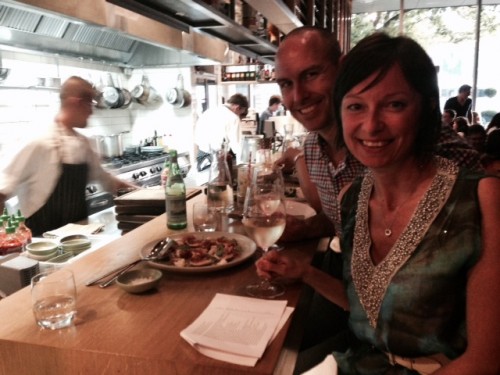 Just as I am swearing it’s the best chicken dish ever, I’m proved wrong as two blackened charcoal chicken pieces with a hillock of coleslaw arrive. Mr LML is ravaging a thigh like the Wolf of Wall Street. Four hours of sous vide at 67 degrees renders the meat like butter, crispy blistered skin and a flavour sensation which has me looking at the remainder of what’s left, then looking at Mr LML knowing this is a fight of ownership till death. Fortunately our neighbours have ordered a stunning caramel popcorn sundae which distracts Mr LML who gets that wanton look in his eye. It’s a thing of beauty; layers of lusciousness with a top hat waffle cone in an elegant stemless glass. If this is stoner food, then I am in. 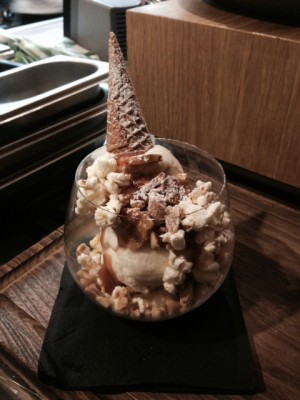 All of the yum

Next day we are up early as Mr LML heads out to meet his mountain bike buddies and I look forward to a day of mooching around the Acton complex. First up brekky!

It might sound like somewhere you would stop off to get DIY supplies, but pull up a chair and watch the boys man the pans at warp speed. It’s a country kitchen decked out with railway sleepers, colourful tiles and recycled glass lamps showing the ethics of the place are not just in the produce. 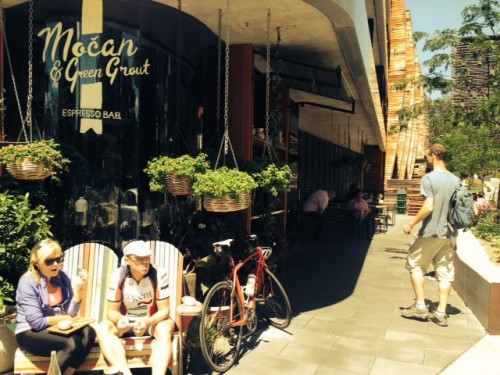 Ordering the Tripou free range backed eggs is a great decision, spicy tomato base, perfectly soft oozy eggs, creamy hoummus, slices of pickled radish and yoghurt couldn’t be beaten although I have to say the layers of seared haloumi, cavolo nero and a perfectly poached egg gave it serious competition.

Cooking up a storm

A wander around town surprises as it’s the first time I have ventured into Canberra’s city and the shopping centre entertains me easily for a few hours after a very easy 15 minute stroll from the hotel.

Back at base camp. Mr LML is now starving (and alive) following a whole day in the hills, so we spend our final evening at A.Baker. Built over two levels, the scars of the 2011 fire which destroyed a large section of the complex are now become part of the design, fitting its honest, pure approach to ingredients. It seems there is one thing connecting the hotel and its restaurant cousins; respect and celebrating ACT’s best elements.

Everyone around us is tucking into oysters so like sheep we follow. Topped with a crumb of pangratatto and an inventive bacon jam, they’re instant winners. Chunks of char grilled juicy slow cooked octopus on a bed of buckwheat along with spaghetti dotted with flavoursome smoked lambsliver kick off our small plate selection. It’s hard to manage restraint with the corn bread. However the ‘Dutton Park’ duck rewards us in all its maple glossy, glamorousness nestled in a garden of Nicola potato and black cabbage.

We hand in our bamboo room swipe cards and say ‘goodbye goodbye’ to Hotel Hotel. We now know why they repeat themselves, it’s not about the purity of the brand. Just like the song ‘New York New York’, it’s so good, they named it twice.

Have you been to Canberra recently? Share your tips in the comments.

Karen is a journalist who developed her love of food, wine and luxury travel through her corporate career in Europe, which took her to the best restaurants and enabled her to travel extensively and also study wine. When the itch to see, experience and taste more became too great, she took off on an adventure, which turned six months of travelling into two years of planetary wandering. Now settled in truly one of the best places in the world (Australia) she continues to follow her passions and now writes about them, so others can share too. You can check her out on Pintrest or read more of her adventures here.