For many people Sri Lanka has only recently returned to the travel radar, but those who’ve gone have fallen in love. I lost my own heart earlier this year, but I’ve calmed myself long enough to give you 6 reasons to visit Sri Lanka now. Beautiful beachesSri Lanka is often referred to as the teardrop of India; surrounded by the warm turquoise waters of the Indian Ocean, it’s little wonder the beaches are fantastic! Laze around in beach clubs drinking Lion beers and listening to Bob Marley in Mirissa or Unawatuna, or hit the surf in famous Arugam Bay. Whatever kind of beach you’re after you’ll find it in Sri Lanka! 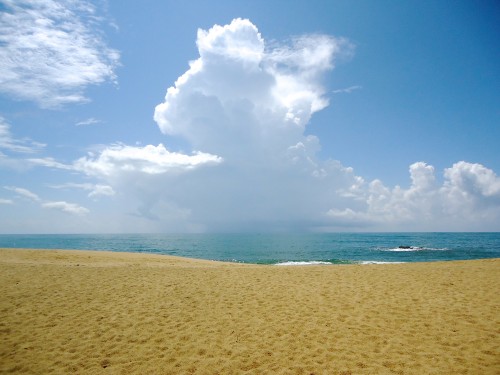 I swear these colours are real!

Amazing food
The food in Sri Lanka is without a doubt some of the best I’ve had in my life. It might not look pretty, but the flavours pack a punch! 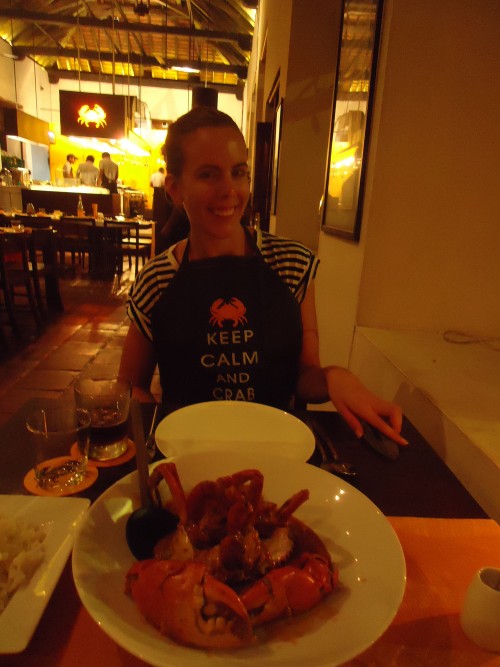 Try a spicy Sri Lankan breakfast of string hoppers with dal and coconut sambal. Not sure what you feel like for lunch? Not a problem; sit down in any local restaurant and order yourself a plate of short eats, which are deliciously devilish deep-fried snacks. You’ll be brought a plate and only charged for what you eat – winning! 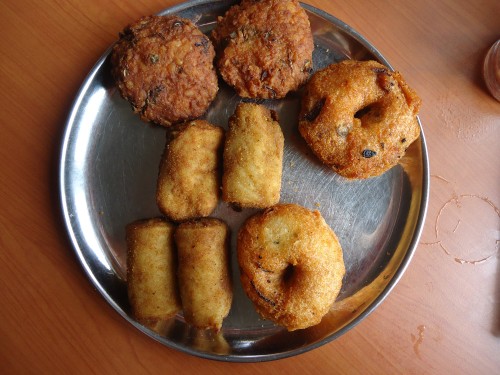 The only trouble is stopping.

Of course, when you’re in the south seafood is the way to go. Order yourself some freshly caught prawns in one of the beach clubs and watch the orange sunset melt into the sea. Another bonus is that the food is cheap as chips – if you’re eating from street stalls or local restaurants, expect to pay just a few dollars for an awesome meal. Bonus cute factor: street snacks are wrapped in recycled paper, including children’s school homework!
Travelling by train

There is a kind of nostalgic romanticism in travelling by train, which makes it my favourite way of getting around. Sure, it might be hot and rickety and completely lacking in modern facilities, but it truly is the best way to soak up the sights of a foreign country. 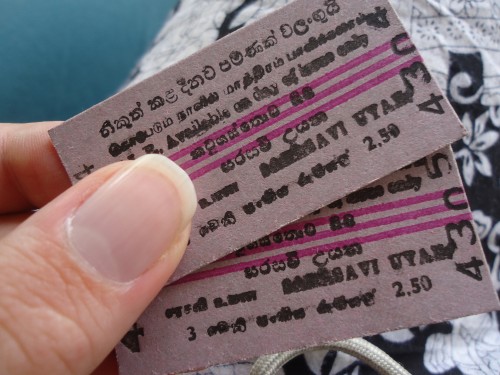 I’ve got my tickets.

Sri Lanka is unbelievably scenic and the train routes don’t disappoint. Catch a train between Colombo to Galle to experience magnificent views as you journey down the coastline – you’ll pass beach after beach lined with palm trees and inviting turquoise waters. Another great route is Kandy to Nuwara Eliya. Weave thru Sri Lanka’s magnificent tea plantations and breathe in the mountain air!
The Cultural Triangle
For such a small country geographically, Sri Lanka certainly isn’t lacking in culturally and historically significant sites. With eight World Heritage listed sites you really are spoiled for choice. The most famous region for travellers is in the centre of the island – the Cultural Triangle. Visit Kandy’s famous Temple of the Tooth, marvel at the Dambulla Caves, see the Reclining Buddha in Polonnaruwa, cycle thru the Sacred City of Anuradhapura and climb Sigiriya rock. 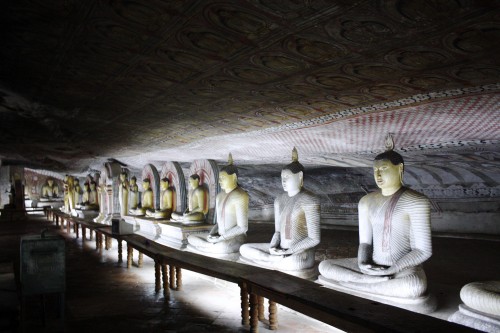 Treasures in the Dambulla Caves.

Tip: If you’re going to do Sigiriya rock, I strongly recommend you arrive before 9am. When you’re climbing a 200m high rock (that’s approx. 1200 steps – phew!) you definitely want to do it before the sun gets too hot. Also, learn from my mistakes and wear something cool like shorts. A maxi skirt was a bad choice that day! 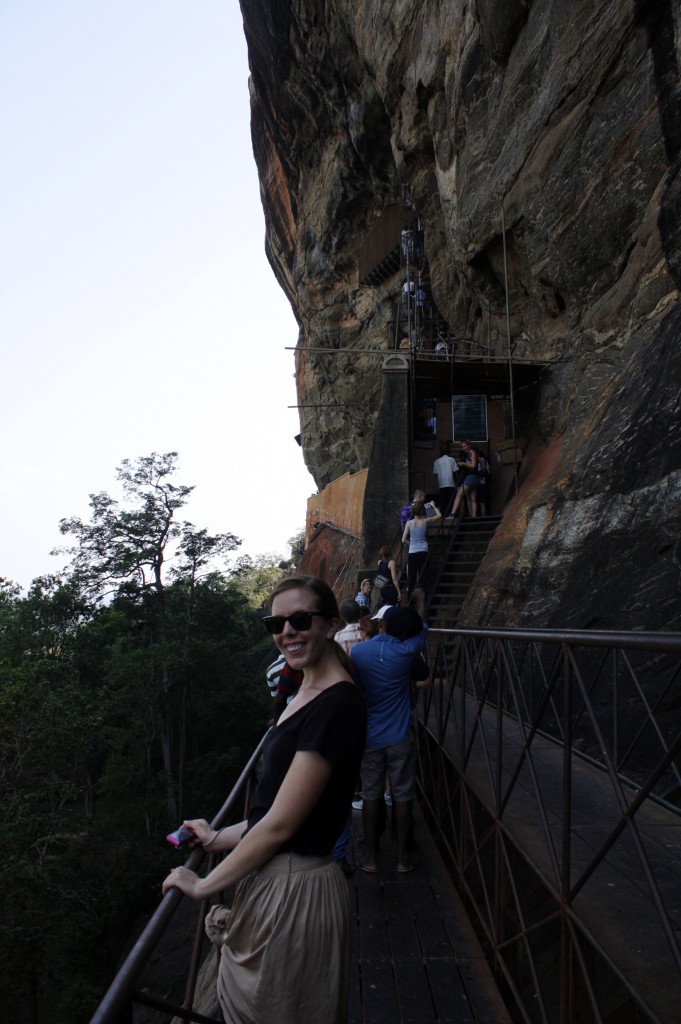 Although sometimes you do have to suffer for fashion…

Hiking hotspots
There are two spots that are usually on any keen hiker’s list when visiting Sri Lanka: Sri Pada (or Adam’s Peak) and Horton Plains. After spending a bit too long at the beaches, I only had time for one and chose Horton Plains. This was one of the best days I had in Sri Lanka. The trail is fairly easy, but the heat makes it a little more challenging. You are certainly rewarded for your efforts, though! Follow the 9km track and discover World’s End, a straight 800m cliff drop overlooking the rolling hills of Sri Lanka’s tea country. The park itself has an unearthly quality about it, with flat, stretching plains and swirling clouds of mist! 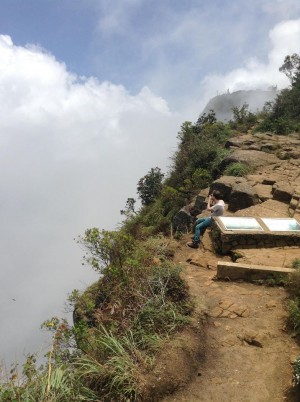 For those with a bit of extra time, try Sri Pada the Sacred Footprint. Start at night and follow the pilgrims up the 2243m mountain to arrive at the peak in time for sunrise. Christians and Muslims believe the footprint-shaped mark at the summit belongs to Adam (hence the name), whilst Buddhists believe it came from Buddha. Whatever your religious belief, the climb is said to be hugely rewarding both physically and spiritually.
Wildlife safaris

Being an animal lover, I was SUPER excited to be heading off on safari. There are numerous parks in Sri Lanka, the most famous being Yala National Park. After rising at 5am, we headed off in search of the famously elusive Sri Lankan leopard. To be honest this was no African adventure, but we did see elephants, deer, colourful birds (including peacocks!), crocodiles, and a glimpse of a leopard tail! 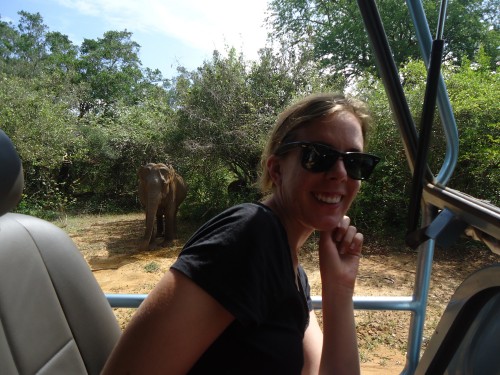 Getting up close and personal with a baby elephant.

Birdwatching enthusiasts will love the nearby Bundala National Park, but for something really different try an elephant-back safari in Anuradhapura, or search for blue whales on one of Mirissa’s very famous whale-watching cruises.

Have you been to Sri Lanka? Share your favourite memory in the comments!

Brittany Dowsett is an adventure and experiences expert! Her bucket list is miles long, but she plans to try it all! Brittany is pretty fearless; her only real fear is missing out on all the amazing things there are to see and do! Some of her unforgettable experiences to date have been attending one of the Dalai Lama’s teachings in Varanasi, going paragliding in Pokhara and walking with lions in Zimbabwe! The next experience Brittany is hoping to tick off her list is swimming with the whale sharks - AMAZING!