Julie gets back to nature in the cool climate rainforest in the far reaches of north west Tasmania. 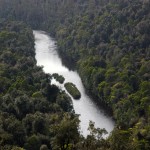 One of my favorite things to do in Tasmania is bushwalking and since 40 percent of Tasmania is protected in National Parks and Reserves there is definitely no shortage of new and exciting places to discover! I was so excited when I learnt my next lastminute adventure would be a Tarkine Wilderness Tour; and my husband was even more excited to learn it would be from the comfort of a 4WD.

The Tarkine is in the north west of Tasmania. It is the largest cool climate rainforest in the southern hemisphere. The name Tarkine comes from the Tarkiner Aboriginal tribe that once lived there.

Our tour started at 9am from Tall Timbers hotel, Smithton. Rob Saltmarsh was our guide for the day. Rob has been with Tarkine Tours for 10 years and has lived in the area for 20 years. After a brief introduction, it wasn’t long before we left the Beef and Dairy farms behind us and entered the Tarkine area.

Arthur River was our first stop, Sumac lookout offers the best way to see the enormity of this river. It runs a lengthy 170Kms! 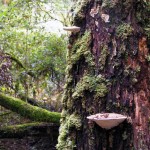 Morning Tea was served after a short walk through the forest of Julius River. Walking in the rainforest is the only way to really appreciate its beauty and talk about a photographers delight: A crystal clear river, century’s old eucalypt giants, Manferns and some very colourful Fungi. Rob knew everything there is to know about this forest and made the walk so interesting and enjoyable. I loved learning about things we would have clearly missed, that is, if we hadn’t had our trusty guide to point them out and explained them to us!

Back in the comfort of the 4WD we madeour way to the rugged coastline at Couta Rocks. Breathing in the fresh sea air, we walked along the coast and took a look at some Aboriginal middens and rock carvings. Particular areas have now been proclaimed reserves to protect the Aboriginal relics; rock carvings, hut depressions and middens. We visited one of these reserves at Sundown Point, again Rob’s knowledge of the aboriginal history is amazing, really giving you a glimpse into their way of life all those years ago. 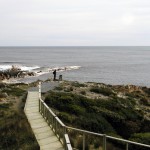 The Edge of the World

Reaching the Edge of the World, Rob set out a gourmet lunch, which we washed down with a lovely glass of local wine. Taking in the million dollar view – no restaurant could match this! After our yummy lunch, we hit the road again, driving home overlooking the great southern ocean. Perfect end to a perfect day.

The tour lasts eight hours and it really does fly by. Having such a wonderful and experienced guide really ensured we made the most of exploring the Tarkine, with all of its majestic rainforest, rugged coastline, towering mountains and Aboriginal relics.

And the best bit…I was able to walk the next day!

Keen to experience your own tour? You can with a lastminute.com.au experience! Click here for details